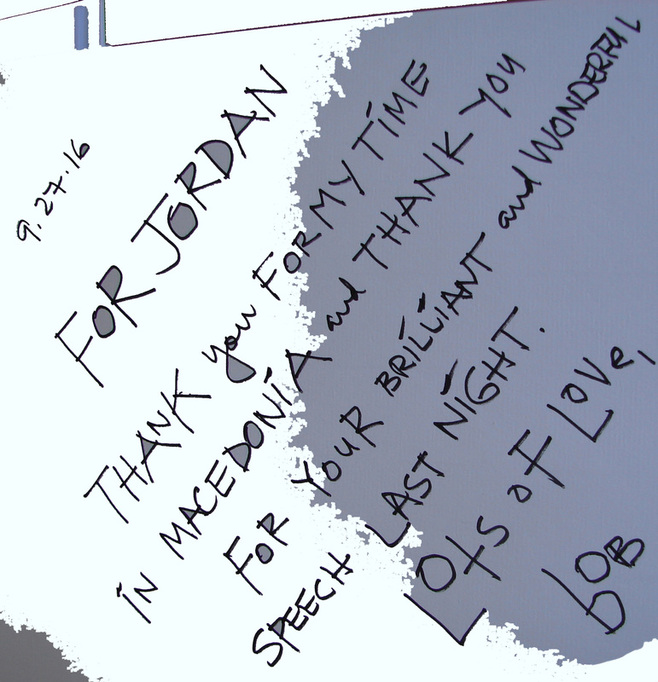 Just three years ago, after the Sorbonne University
Dear Robert Wilson, Macedonia nominated you as a
Doctor Honoris Causa at the University of Audiovisual Arts,
European Film, Theatre and Dance Academy, Skopje - Paris - Essen - Rotterdam
And the Macedonian National Theatre is happy that you are now on its stage
Beside the river Vardar, mentioned by Homer in the Iliad as the glorious Axius.
The Great Mother and Manada welcome you
Because Macedonia is considered as the El Dorado of the European Neolithic Age
The amphitheatres welcome you that are disclosed on the territory of the Republic of Macedonia
In the hall of the National Theatre in the form of spirits from over millennia are present,
Actors, satires and antique choirs, with dances, songs and lyres
From Lihnidos amphitheatre in Ohrid,
Which with its message revealed your celebrity counterpart Peter Brook,
After two thousand years of silence, in August 2001.
The amphitheatre Heraclea welcomes you with the poet's head
Kept in the British Museum in London,
The amphitheatre in Stobi at the River Erigon that flows into the Axios welcomes you,
Where one of the first synagogues in Europe is built,
The amphitheatre in Scupi welcomes you,
With statues of Roman emperors
And all non-unearthed amphitheatres, where still
Ancient protagonists and antagonists can be heard,

Who played in the last tragedy of your favourite author Euripides,
Entitled “Archelaus or early peoples”
Because itself he ended his own life in the
Aretusa village or Maslar,
Located on two hours of bird flight from the scene
On which Macedonia nominated you as a Doctor Honoris Causa
Immediately after the Sorbonne!

To move through the history
Also, one of the oldest terracotta icons welcomes you
Found in a vineyard in Vinica Kale
Also, the fresco Angel of Kurbinovo welcomes you,
And St. Matthew from Ohrid Gallery of Icons
Also, the verses from your performance Rumi welcome you
And the voice of Mevlana that echoes from the shrines
Described by our mutual friend Kudsi Erguner,
That was your composer in the eponymous play,
And he performed the music for my drama “R”,
In Marseille directed by Mehmet Ulusoy
Also, the Colourful Painted Mosque in Tetovo and Kursumli An in Skopje welcome you
From the glorious buildings of the Ottoman Empire
Through the words of the apostle Paul, resounding up today
In the Macedonian multi-ethnic spiritual reality:
“If you have not a love you have nothing”
With that Love we will evoke your theatre and visual revolution

What you did in all five continents of the planet Earth
You are a revolutionist and before you were born
Because it started with your birth on October 4, 1941 at the height of World War II
In Waco in the US state of Texas
And you're still a child, when Theodor Adorno said:
“How is it possible to think of poetry and art after the horrors of Auschwitz”,
But, because forgetfulness is the foundation of world history
Borges noted that: “The only thing that is immortal in the history is the humanity itself”
You yourself, as all alone and lonely people that build the idea of ​​world civilization
You started to look for your expression,
And through the architecture, and through the dance and through the visual arts
That refract through the theatre of Shakespeare's World Stage
And because today you are a guest of Macedonia and the Balkans
We will dedicate to you, one of the most beautiful sentences of the
Researcher of Balkan civilization, Professor Branko Gavela
Who described the individual growth in art with words as follows:
“Chained in the body, the human spirit from matter grew like a flower from the stone”
Welcome Robert Wilson, welcome the flower from the stone!

Your dance, theatre and visual revolution begins with
Merce Cunningham, Martha Graham and George Balanchine
And then you move into infinity that you create it yourself,
And that infinity bears your name because “Einstein on the Beach”, together with the
Composer Philip Glass experienced such a worldwide success
What you were perceived as a new tectonic shift
In the scenic and visual arts whose


Fruitful achievements, not only fascinated so called
Transatlantic civilization between Europe and America
But by your presentations on BITEF in Belgrade in 1971
And the Shiraz-Persepolis festival in Iran in 1972
You started to wake up the illusion that the theatre will change the world;

That illusion continues with a terrific pace:
Through Shakespeare's King Lear and his and your soliloquy of Hamlet,
Through the Hamlet-machine and all other Heiner Müllers
Who are present today in our memories
That a new utopia will save the world, but it has never saved it
Through the Black Rider with William Burroughs and Tom Waits,
Parsifal and The Ring of the Nibelungen by Richard Wagner
Through Buchner, Ibsen, Brecht, Beckett,
Through VOOM video portraits and the immortal game of Baryshnikov
And installations that disturbed the spirits of Venice, Tokyo and Oslo
Reaching Russia, India and China
And your last exhibition at the Louvre
Where you did to cry the whole art and sculpture classic
And the world never have been saved!

In Skopje you have reached yesterday from the premiere of Faust in Paris
Earth is shaking by wars, destruction, millions of innocent victims and refugees
And here in the name of this ceremony I would like to defocus your attention
To the meaning of the word Planet comes from the name Planetos - or a lonely man - a wanderer

You are planetos and because you're in the Balkan region, where it took place
The first drama of refugees from the Greek-Persian War,
When the historian Herodotus was brutally attacked by his contemporaries
That carelessly increases the battle of migrants that then was around 30,000
The tragedian Sophocles stepped with the text “Defence of Herodotus”
In which he emphasized the humanity of Herodotus in relation to refugees,
Two and a half thousand years after that event,
The High Committee for Refugees in the United Nations,
Announces that the officially registered number of refugees in the world is 273 million people
What can today Shakespeare’s Scene World
And Robert Wilson’s visual revolution to answer this question?

Whether the art is totally powerless against war destruction
That the Great Powers using it to rule the world?

Dear Robert Wilson, at the end of this ceremony
That we nominate you as a Doctor Honoris Causa,
I will remind you of the lecture of 1946 in the Brooklyn College in New York
Albert Camus, who Sartre said he was the “last wonder of the Mediterranean”
He spoke the following words:
“All ideologies will disappear and only one tyranny will remain to rule over the helpless humanity, and it is Tyranny of money.”
Because You are the Global Revolution by yourself
In the spirit of Baudelaire's verse that “all starting by one person and finish by same person”
Let sprout like flowers in the Rock Your VOOM portrait of the planet Earth
In which one of a single moment and nothing more we will believe that we are saved.